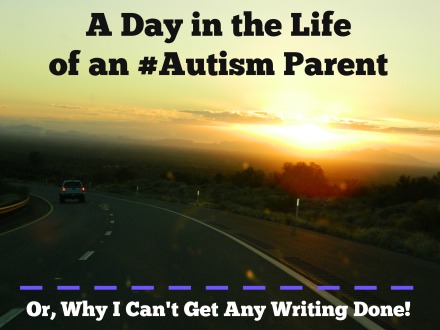 I sat down to write a blog post Thursday afternoon (2-11-2016) and was immediately distracted by an idea for my WIP. As I’m pretty scatterbrained, I dropped everything and dove into writing. I didn’t stop until it was time to go pick up the kiddo several hours later. This is a very good thing.

And then it was time for the after school chores: snack, homework, dishes, dinner, etc. Looking at the calendar, I realized that it was a four day weekend because the local high school was moving into their new digs and all the kids were off to give teachers the chance to pack and move. Not only were the high schoolers moving, half of the elementary classes were shuffling into the old high school. Yay. Thankfully, Little Man won’t have to worry about moving to a new building until next year.

I knew that having Little Man home means little to no writing (who am I kidding, I can’t even concentrate on video games when he’s home!). Little did I know how rough a weekend we’d have. He was on full blown melt down mode on Friday. Everything was setting him off. Ah, the joys of autism. 😀 Saturday was a little better, sort of like having a hangover. I’ve noticed a trend with his melt downs. If he has a full day of meltdowns, the next day is not a great day, but it’s not a bad day, either. Sunday was MUCH better, he was back to his smiling, loveable self. I’m pretty sure that having his schedule interrupted was the catalyst. Can’t say that I blame him, I don’t like my schedule being derailed either. Makes mommy a crumby non-writer.

He was so good, in fact, that the Hubby took him grocery shopping. Normally, he has at least one mini-meltdown at the store. We keep taking him to the store so that he can adjust (since, eventually, he’s going to have to shop for himself). Thankfully, he didn’t have a single issue. He didn’t even have to wear ear protection and it was a busy, last-minute Valentine’s Day shopping nightmare.

I had hoped to get some writing done yesterday since Hubby was getting Little Man out of my hair. At the very least, I wanted to get caught up with my “What is a Plot” workshop. Nope, not a word written. Instead, I did the dishes, laundry, watched a movie and played Farm Heros Saga. My brain was mush.

Today is Monday and I feel like I’m starting the week already behind. What I wouldn’t give for a beach vacation and an adult beverage.

UPDATE: I got a call from the school today (2-17-2016) letting me know he was freaking out because he’d just lost a baby tooth. He threw it on the ground and was bleeding (which always sets him off). He was pointing at his tooth and then to his mouth. They finally got him calmed down a little but he’d broken his water cup in the meltdown. SO….I had to bring the school another backup cup and pick him up. The moment we walked through the door at home, he wanted the baggie with his tooth. Then he opened it and wanted me to put the tooth back in. *sigh* I ended up distracting him with Oreos and hid the tooth. And I STILL haven’t gotten any writing done…

Attack of the Hazacks: An Erebus Rangers Short Story